At this point in time I am sitting on my bed Reeling from all the food I just ate. I am uncomfortably full and I love it.

Initially, when one decides to really commit themselves to improving their health and following a sound nutritional program, they may find that the hardest part is the will power required to pass on all the junk food constantly being consumed by the masses.

The Caveman2.0 lifestyle in no exception to this. In fact, The caveman2.0 diet may seem especially restrictive at first. After all Caveman2.0 does not include breads and grains which generally make up the bulk of the entire western diet.

Now I promise that with a little bit of patience, once you see how much better you feel once you get all the foods out of your system that aren't optimum for good health, you won't really miss them at all.  Before long, bread won't really be very appealing at all and when you do finally break down and try bread again (for an "open" meal) the accompanying gas and bloat associated will make you think twice about doing that again.

Once you get all the artificial flavors out of your system such as aspartame and msg, and you begin to taste natural food the way you were intended, you'll begin to cave the goodness of an apple or an avocado like you never thought possible. You won't feel the desire to coat your food with table salt anymore because you'll want to taste the flavors of your food and your taste buds will respond by tasting fruits and vegetables in  a way that you never have before.

But let's get to the main reason why I wrote this article. The "Cheat meal" (or "open meal") After following Caveman2.0 all week and being really good, (that means not cheating at all) I do recommend that you go out and reward yourself. Go out and get that one meal that you may very well have been craving all week. Myself, I don't get junk food cravings anymore but I do like to indulge in that one cheat meal a week where I can go out and have as much as I want of whatever I want.

One meal a week go out and indulge, enjoy, make it a real event, eat until you regret it and get right back on track as soon as you are done. The next day get up and start planning next week's excursion. It's that simple.

Now for an example:

On Monday of this week, some friends and I decided to go out for dinner. I had just finished a particularly intense workout and I thought a nice big juicy steak (very caveman!) with a double serving of steamed broccoli seemed like a great idea. When we got there we discovered that this particular restaurant was offering all you can eat ribs all day every day. I stuck with my steak while they all had multiple helpings of ribs. That's when I decided what I was going to have for my  cheat meal.

All week I planned for this meal and I got two of my friends in on it too. Let me tell you it was an event. I started with a full rack of beef ribs. They came with fries and cornbread which I didn't really touch. It wasn't because that they aren't caveman that I avoided them, but because I wanted to save room for the ribs (ribs are Caveman2.0 but the barbecue sauce that was on them most definitely wasn't) After three plates of ribs we had brownie sundaes for dessert. Now I am sitting in front of my laptop eating a bag of Reese's peanut butter balls about to slip into a junk food coma. The best part is I regret nothing.

In no way do I recommend over indulging the way I did this evening. The point I am trying to make is that if there is something you are truly craving, then don't deprive yourself. Make an event out of it and have your reward for being good all week. If you want  to overindulge the same way I did then go right ahead and don't feel bad about it at all, you've earned it. Just make sure that when it's all done and over with, when you wake up from your food coma, that you put your Caveman hat back on and get right back to achieving you weight loss and fitness goals.

The final point I am going to make is about the term cheat meal. I know lots of people don't like the term and prefer open meal because cheat  meal sound as though  they are doing something negative. Call it whatever you like because no matter how you label it it's still eating a lot of junk that is generally taboo. I like to call it my cheat meal  because to me that's exactly what it is. A chance to cheat on my diet once a week and enjoy every second of it. Tomorrow, when I wake up, I'll be right back on track and I'll start planning next weeks indulgence. 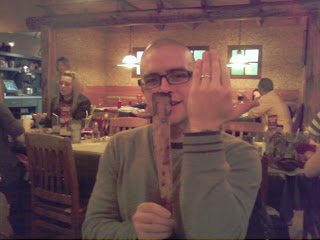 P.S. here's a pic of me holding up one the the massive ribs I got to chow down on
Posted by Unknown at 7:57 PM