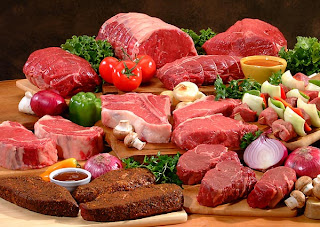 Caveman 2.0 is a modern "Urban Caveman". We do our best to remain cavemen in todays age even though the cellphone and briefcase have replaced the spear and club.

We are quite different from our Palaeolithic counterparts, however, our most basic physiological needs remain the same. We physically haven't changed much in the past 10 000 years and the foundation of what keeps us alive and healthy remains largely unchanged.

We now do the majority of our hunting and gathering in a supermarket. This in many cases can only give some added challenge to eating properly. The store shelves are stocked with convenient and cheap processed meats and grains, sugar laden dessert foods and prepackaged boxed goods.

Through all these temptations and conveniences it is imperative that we remain vigilant. Being urban cavemen doesn't mean you have to give up any of the foods you love, but you should keep it to occasional rewards for eating right the rest of the week. Ideally I recommend one meal a week when you can eat as much as you like of whatever you like. Get it all out of your system at once and then go back to eating healthy. It works great for me and you don't have to feel deprived. Although as you begin to see how great you feel on the Caveman2.0 lifestyle, you won't miss those foods much.

So what does Caveman2.0 eat?

Ok. Imagine you are sitting alone in the the woods. All you have about you is your spear and your wits. You have access to fire but no cooking pots, pans or utensils, and you're hungry because you haven't eaten in a couple of days... That means can eat pretty much anything you can club or spear, along with anything you can pick from the ground or a tree and eat raw.

The main staples of our diet were meat and fish with all of the vegetables we could gather. Fruit would have been scarce and seasonal at best. There would be plenty of berries but they wouldn't have been the gigantic overly sweet grocery store variety. Fruits and berries would be much smaller and much more tart or even sour than something you would pick up off a shelf. Nuts are fair game and would be eaten as much as possible but they are seasonal as well as regional so they were also a rare commodity in colder climates.

Our diet would have consisted mainly of Large amounts of meat and fish. Protein and fat. Most of our carbohydrate would have come from leafy green vegetables and although plentiful, the carb load would be negligible. It would take about twenty cups of chopped romaine to equal the amount of carbohydrate in one slice of whole wheat bread.

Bread and grains would have been unavailable at time. Bread would not have been invented yet and grains have to be milled and we wouldn't have had the means to process them. Grains are not at all healthy or caveman and I'll dedicate an entire post to grains shortly.

Legumes are in the same boat as grains, they have to be processed and cooked in order to break down the toxins and make them edible. This would have made them unavailable to us at that time.

Nothing processed. Nothing pre-packaged. Generally anything with an ingredients list would not be considered food. Stick to the outer perimeter of the grocery store, that's where the real, whole food can be found. I generally only venture into the inner aisles to find almond butter, coffee, or for an "open" meal.

Milk is a grey area. The debate about Milk rages on and on within health circles and even in the Paleo/Primal/Caveman world.

Milk would have only been available to nursing babies from their mothers. We would not have domesticated cattle at that time so we would have ceased to ingest any dairy after infancy.
Many people are lactose intolerant. This ranges from mild cramping and diarrhea to full blown leaky gut or severe allergic reactions.

I don't consider Milk to be caveman because it would not have been available to us. We are the only animals on the planet that regularly consume milk after infancy and we did not domesticate animals to get milk from in the Palaeolithic era.

However, I do drink milk. For those who can stomach it, milk is second to none as a workout supplement. I want to increase my strength and lean muscle mass and milk is wonderful for doing just that. It contains a near perfect balance of Protein, Fat and carbohydrate. It contains all the calories one needs to put on size and strength. An old school powerlifter trick is to drink a gallon of whole milk a day on (GOMAD) on top of the regular food they were eating during the day. This works wonders and many powerlifters boast wonderful gains from following GOMAD.

I don't recommend drinking that much milk daily unless you want to put on that kind of strength and size because you'd also put on a significant amount of body fat as well. But if that does interest you, eating Caveman2.0 style along with GOMAD and the proper lifting program would work miracles. Personally I like to down a liter of whole milk after I work out and my strength gains have been great.

If you are going to drink milk, stick to whole milk, preferably organic and preferably raw unpasturized milk. The closer you can get to it's most natural state, the easier it is for your body to process and the better it is for you. Don't worry about the fat in whole milk. A major part of Caveman2.0 involves a shift from high carbohydrate diet to a low carb high fat diet.

To put things into perspective, let's list the foods that are prefferable to the Caveman2.0 lifestyle.

Meat, poultry and fish: Real meat, nothing processed. Especially organ meats (yes that includes liver) Early Cavemen would have eaten primarily the organs of an animal as opposed to the muscle tissue which is commonly eaten today.

Vegetables: All the vegetables you want. Yum Yum!

Nuts and seeds: They are a great source of healthy fats and are calorically dense to they are filling and will hold you over for a while untill your next meal.
Fruit: Eat in moderation. Todays fruit is cultivated for sweetness and therefore has a much higher sugar content than what would have been found in the paleolithic era.
Whole milk: At your discretion. Not considered Paleo or Primal But good for the serious strength athlete.

Berries: a great source of vitamins and antioxidants. perfect as a desert.

Sugar: The root of all that is evil.

I'll get into why these foods should be avoided in a later post. In the meantime try to follow these basic rules for eating. Bt remember not to over think it. With a bit of practise it should become almost instinctive. Just remember to keep it simple, if it doesn't seem natural to you it probably isn't. Trust your gut feeling.
Posted by Unknown at 3:23 PM