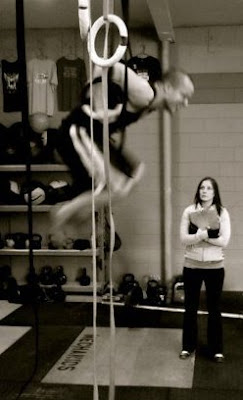 Well this was an interesting week. I barely had any time to train because I had to do Ruck Sack marches Tuesday and Thursday and I find if I go to the gym after rucking 10 - 12k with 50 pounds on my back I'm wasted the next day. The adrenals have finally succumbed to years of beating them down and I have to be really careful not to overdo it.

You may have noticed that I am just following the Crossfit.com WoD lately. I'll stick to that doing their workouts a day behind. The past year I have been so obsessed with strength that I would barely call what I have been doing CrossFit. It worked for a while but I find that my endurance while performing at a high intensity has suffered. True I have become stronger but to be completely honest, for the little bit of strength I have gained in my squat, I'm not sure if the trade off was worth it. Before leaving for Basic training two years ago I was making wonderful gains following the Main Site and I'm pretty sure I'd be just as strong  today if I never followed a strength bias and just stuck to the main site and ate a ton of good food.

I'm going to follow the main site with a slight bias towards working on weaknesses. I am still going to dedicate a day every week to improving my squat as that is the single most important exercise there is to building total body strength. Also I am going to concentrate more on my particular weaknesses. Not spending time on my weaknesses was my undoing this open sectional. I attribute my mediocre performances not to lack of conditioning or strength, but to having one skill in most of the workouts that I have not developed. First it was double unders, then it was box jumps, and  this week it was wall ball. I know what I have to work on for next year and i plan on going into the sectionals with no glaring weaknesses. It is frustrating being held back by being under developed in a particular skill when you have tons of gas in the tank. There were times on Saturday when I had no rep called three times in a row because my aim was terrible. This will not happen again.

All in all the sectionals have been a great learning experience so far. As frustrating as it has been I have learned that having a huge gas tank won't get you very far when you keep tripping on your rope or can't aim the wall ball. But it's ok. I know exactly what I have to do to become closer to the athlete I want to be. This was my first year competing next year will be completely different.
Posted by Unknown at 6:43 PM