It's sure been a while hasn't it. Once again I must apologize for my lack of updates but I have been on a personal protest against most forms of modern technology. Therefore I have been spending an absolute minimal amount of time on the internet. I've spent the past couple of weeks only logging on to post workouts on my other page, Caveman Performance.

Today is part two of my three part series dedicated to the three lifts that should form the foundation of any strength program. Today we're going to cover the power clean. The Power Clean is definitely the most complicated  of the movements I plan on covering in the series, but with a little practice and a bit of proper instruction anybody can learn it.

So why should we power clean?

The power clean is essential for developing the kind of explosive power that is essential to any and every athletic movement. All athletic movements originate in the hips and involve an explosive opening of the hip area. The Power clean trains exactly this movement and therefore translates to improved athletic performance in everything from an Olympic high jump to just being able to walk up  the stairs on your own when your 90 years old.

I find that the hardest part about teaching the Power Clean is having my student catch the bar in the proper rack position. People tend to think it's becase they lack wrist flexibility, but I beg to differ. It's more accurate to  say it's because people don't trust their shoulders enouch to balance the bar so they try to catch it with a death grip.

The lady in this picture has a great rack position. Take a second to commit this to memory. In the finished position of a Power Clean, the bar is resting on the anterior deltoids (the front of the shoulders). The upper arms are perfectly parallel to the ground and the fingers are completely relaxed. This places minimal strain on the wrists.

The problem most people have here is not wrist flexibility. It's that they don't trust their own bodies yet and they think they can't balance the bar and that it's just going to fall off. However, if you have your upper arms properly parallel and the par is resting nicely on your shoulders, I promise the bar is not going anywhere. You don't need your hands at all here.

Get over it and trust your own body. I like to have clients pick the bar up in the rack position before learning the movement and hold it there to get comfortable and to help open up the wrists and shoulders.

Now look at this guy. He has a decent rack (teehee) However, notice the grip his hands have on the bar. He is exhibiting a good amount of wrist flexibility here but his death grip on the bar is preventing him from getting his elbows up to parallel. Not to take away from his skill level, I don't know him personally and he could very well be doing a workout that involves fast multiple reps. For the time being though, I want you to look at his grip and his upper arm angle and compare it to the girl in the above photo. Now think "open fingers, good elbows. Closed fingers, bad elbows"

You're going to have to allow your grip to open up right before the bar lands o your shoulders. Don't worry, you'll figure it out.

Now back to the beginning

Take a stance with the bar about an inch from your shins. Bend over and grab the bar in a similar manner as preparing for a deadlift. I prefer a more vertical torso when preparing to do a clean, similar to the good fellow in this photo.

Grab the barbell using the Hook Grip. Always Olympic lift with the hook grip! Now after you have properly secured the Hook Grip onto the bar, ease pressure into the bar by taking up the slack. Lift the bar off the ground sliding it up the shins until you get to about your knees. Once you pass your knees you have to jump as high as you. This is that explosive opening of the hips I was talking about. This is the area that makes or breaks a power clean. It is in that jump that gives the bar the velocity needed to travel up to chest height in order to be caught in the proper rack position. 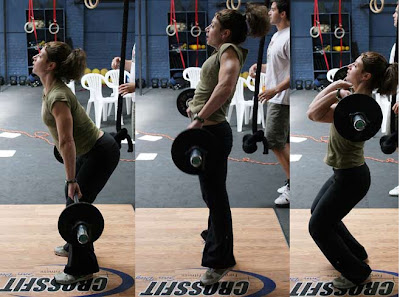 Do the power shrug as you jump. Note in the above photo, in the middle position. As Nicole jumps she is also shrugging her shoulders as explosively as possible. The power shrug combines with the jump and get's Sh*t done.
Now think of your arms as ropes. We don't try to muscle up the bar at all with our arms. They should generally be relaxed during the entire time the bar is moving upward. The only time you need to be working your arms at all during this movement is once the bar gets up to chest height when you bring your elbows up as aggressively as possible in order to get them up to parallel and into the proper rack position.
Some tips to help your power clean.
Now take everything I have just told you and throw it out the door... Seriously.... No kidding.

Stand over a barbell that is just heavy enough that there is no way you could possibly just pick up and put on your shoulders using muscle alone. Now think "How the hell am I going to get that up here!?!"

Bend over, grab the bar and be aggressive.